In 1867, Marx had finally finished working on and published the first volume of Capital and it has written its own history as it were ever since. If the way back to Marx leads through the history of Marxism, then this is particularly true for Capital: we cannot separate the book from the massive impact it has had. In Capital he discusses the two-fold character of social ‘objects’ and relations, yet the book itself has developed a strange two-fold character: it is precisely the constant discussion of Capital and the debate surrounding its current validity that has afforded Marx’s work the status of a being a classic. It is the conflicting interpretations that have led to independent ways of reading Capital and different strands of Marxism that are an expression of the universal conviction that Capital remains ineluctable as the critique of capitalist society.

Why did Capital, which sets out to analyse the development of the modes of production with the famous sentence regarding ‘The wealth of societies in which a capitalistic mode of production prevails,’ have such appeal? The sub heading already contains a crucial clue. It describes what Capital is actually about in three simple terms: a ‘critique of political economy’. The appeal of these three terms – critique, political and economy – is because all three terms lack clear definition. By contrast, Marx’s critique of the political economy continues to provoke fierce conflicts as to how to interpret these terms and over who has the right to interpret them. What actually constitutes critique? How do we define the political and economic aspects of capitalist society and how do these spheres connect with each other and interlock?

Most people agree that Marx’s Capital is neither a theory of revolution, nor the description of a new society. Rather, he radically broke with the academic and everyday understanding of how existing society was made up. This rupture exists in the fact that for Marx an adequate scientific description of the political economy already contains its critique. A description of the economy, according to Marx that does not want to miss its point, necessarily contains a critique of the economy, otherwise it misses its point. This is what Marx means when he states that Capital is his ‘critique through presentation and vice versa’.

Through this peculiar connection, Marx’s critique of political economy is not only enlightening society about itself, it also contains a disillusionment that we could add to Freud’s three ‘outrages endured by humanity’: Copernicus’s ‘cosmological insult’ that earth is not at the centre of the universe, Darwin’s ‘biological insult’ that man was not created by God but, rather, evolved from animals and finally the insult delivered by Freud himself that the ‘ego’ in each one of us is not even master of their own house. The insult that our enlightened society receives through Marx is that it does not do justice to the social character of work and the means of production. The productive force which results from the utilisation of labour and the means of production, according to Marx, confronts society like an alien power. It no longer appears as man-made but, rather, as a power outside of the sphere humans can influence - it becomes a second social nature. Moreover, there appears to be no way to harness this force in a planned, crisis-free and socially just, i.e. rational form in the interests of the whole of society.

Not only is it not possible to harness the social nature and productive force of the economy in a rational and practical manner, economic science is also incapable of providing an adequate theoretical model. As Marx showed already during his lifetime, economic science cannot truly comprehend the economy. In short, capitalist society is both in theory and practice powerless and at the mercy of its mode of production. Capitalism can only maintain the economy through crises and war, inequality and through the ideologisation of the economic and social spheres. According to Marx, at the same time or because of this fact, the history of the capitalist mode of production is not at its end.

“Feminism Is for Everyone”

2017 began with a global wave of feminist protests. Opposition to Donald Trump’s election as the 45th President of the United States was expressed most visibly by the Women’s Marches – and not only in the US itself. In Poland, resistance to restrictions on reproductive rights by the country’s right-wing government continued, while 8 March brought hundreds of thousands onto the streets from Buenos Aires and Istanbul to New Delhi. In Germany, as well, International Women’s Day witnessed demonstrations the likes of which we had not seen in decades. 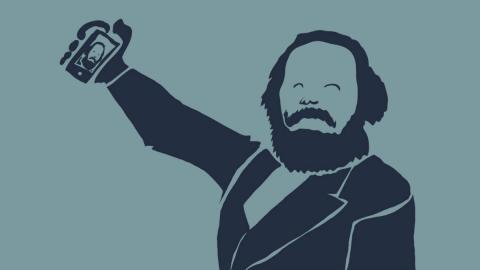 Capitalism as a service – capital is going digital

In his 2015 book, Post-Capitalism, Paul Mason concludes that ‘the technologies we’ve created are not compatible with capitalism’. Regarding the 2008 financial crisis Mason writes that ‘although capitalism is a complex, adaptive system’ it has now reached ‘the limits of its capacity to adapt’. This is not crisis as usual, it’s the final one; we’re experiencing the advent of a post capitalist world order.

The end of growth for global capitalism?

In an article published on 17 July 2016 in the German weekly Frankfurter Allgemeine Sonntagszeitung, Peter Bofinger, a member of the German Council of Economic Experts, argues that ‘a spectre is haunting the global economy – the spectre of secular stagnation’. As he writes, the phenomenon is based on a profound feeling of discomfort regarding the state of the global economy, which has been plagued by major dysfunctional issues for several years.